Pressure ulcers, also known as decubitus ulcers or bedsores, are a common problem in any situation where patients are compromised because of immobility, nutrition, incontinence, or age. Each year, more than 2.5 million people in the United States develop pressure ulcers, which cost approximately $10 billion or between $20,000 and $150,000 to treat per wound dependent upon the severity. Further, these wounds are very painful, are the subject of 17,000 law suits annually and are considered preventable.

The formation of a pressure ulcer or deep tissue injury starts when tissue is deprived of oxygen and nutrients, this normally occurs immediately adjacent to a bony prominence and can be seen ultrasonically as the formation of fluid in the subcutaneous tissue. This is followed by dermal and sub-epidermal edema as the injury progresses.

The EPISCAN's ability to visualize down to the bony prominence and detect these subtle changes prior to any alteration to the skin’s surface being seen is used in the early detection of deep tissue injury. This ability enables clinicians to initiate earlier intervention, greatly improving the chances that the injury will be resolved without an open wound developing. By scanning a patient on admission, the clinician can also better document any anatomical sites at risk of breakdown at the time of admission. 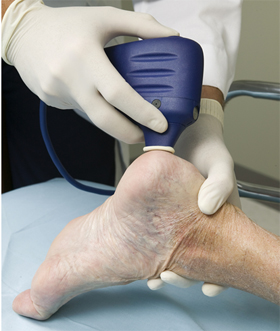 EPISCAN being used to scan a heel

Stage 3 and 4 pressure ulcers are one of the conditions that CMS now classify as never events, meaning they should never happen. CMS announced in 2007 that certain hospital-acquired conditions would no longer be covered by Medicare ad Medicaid.  One of these conditions is pressure ulcers.  This rule change is forcing clinicians to put greater emphasis on pressure ulcer prevention in hospitals. In this regard, the EPISCAN can help hospitals in two ways; it can determine if the patient has come into the hospital with a pre-existing condition such as deep tissue injury, and in circumstances where the injury originates in the hospital, it provides a means of earlier detection leading to prevention.

The FY 2014 hospital payment rule finalizes the general framework for the Hospital-Acquired Condition (HAC) Reduction Program for the FY 2015 implementation.  Section 3008 of the Affordable Care Act requires CMS to establish a program for IPPS hospitals to improve patient safety, by imposing financial penalties on hospitals that perform poorly with regard to hospital-acquired conditions.

Patient care suffers from incomplete, inaccessible and inconsistent use of pressure ulcer assessment and treatment plans. The ruling will serve to improve patient care and communication among health care providers.  This can also provide transparency and needed information for patients and caregivers. An additional benefit to the health system is an avenue to develop quality surveillance and initiatives.

The EPISCAN can be used to improve communications between the clinical team and the patient and / or their relatives. With abnormality found presented together with the plan being implemented to prevent the condition worsening, such communications have been found to reduce the risk of future litigation.

Tissue damage caused by friction or pressure can be readily separated, with the former starting at the epidermis and the latter deep as shown below. 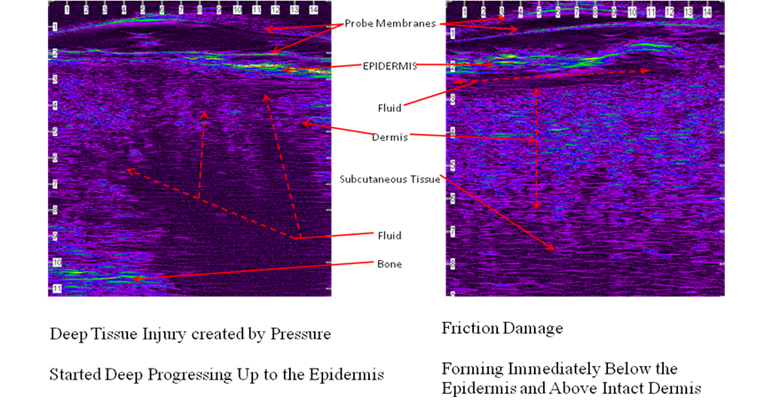 The EPISCAN is finding use in a wide range of research, testing and product validation activities in many fields.